Posted on February 24, 2018 by Homesown@thedevelopingplot

Difficult to feel that there is an abundance of choice for this week’s Six on Saturday with the ground frozen, plants stopped in their tracks and newly emerging seeds looking regretful. Here in this garden a new bout of Winter isn’t welcome. The snowdrops are almost past their best; some of the hellebores are looking strained and much of the garden is pretty desolate. Nevertheless, I am determined not to miss a Six two Saturdays in a row – so here goes (with thanks to The Propagator).

Number 1 is Puschkinia ,  a new bulb for this year. Wasn’t sure I was going to like it in its emerging stage when the flowers looked as if they were going to be  too squat, but today in sun and cold it has grown into itself and looks satisfyingly fresh and starry, though it still has some growing to go. 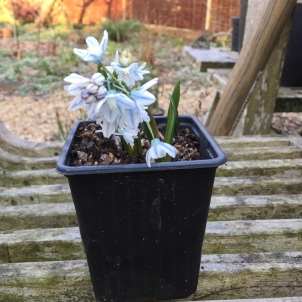 Not fully out, but already very pretty

Number 2 is the stalwart vinca which just pops up her and there along the back fence; today it has a couple of new blue flowers to look at the sun. 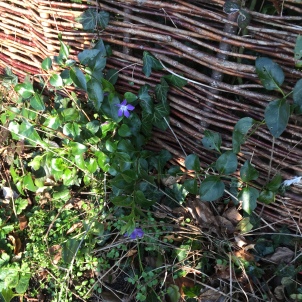 Next, protected in the greenhouse from last night’s freeze,  are the newly emerging tips of my Havel peas, bought from Real Seeds and destined for the allotment. Am hoping to get organised enough to get  a continuous supply of peas this summer – Oskar is next for sowing. It is almost certain that all of them will be eaten fresh from the pod and not make the pot. 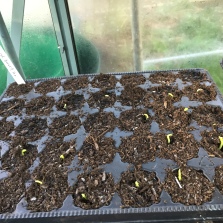 Fourth is the plant which has given me the most joy this Winter – the winter flowering honeysuckle. It certainly doesn’t look showstopping, but its scent stops me in my tracks almost every day. The bees luxuriate in it too. 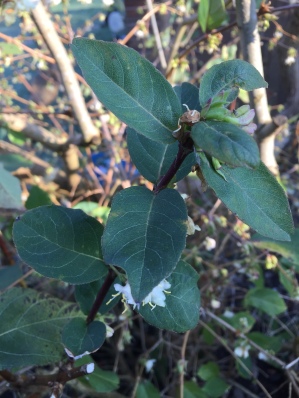 Fifth might have appeared before so apologies, but am surprised, considering their neglect, to have so many small penstemon plants growing healthily from cuttings. This one is Alice Hindley. 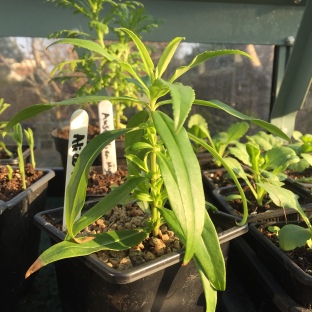 Last is the reappearing tarragon. Shoved in the greenhouse over winter it is coming back tender and green. 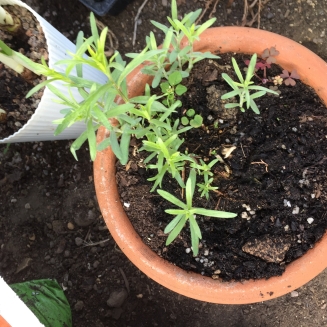 So that was my six and once I started looking of course there was a lot more going on than I thought.

14 Responses to Six on Saturday