Posted on April 7, 2018 by Homesown@thedevelopingplot

One of the many positives of gathering together a Six on Saturday is the way it helps pin down the weather and its patterns. When  growing up I couldn’t completely understand the fixation my Welsh farming mother had on this. But I didn’t have to get up in the middle of the night for lambing or worry about healthy hay. Now in the middle of England and not near a wet and windy coast, I  have my own harvest to grow: flowers for a wedding. A long way off, but March’s cold delay means I am not feeling as relaxed about it as  in February. So keen weather watching has begun.

That leads me into number one, the small patch used for growing flowers in my friends’ large field. Its heavy clay was too dank and cold to work until this week when the sun came out. Out too have popped the nettles and docks, but yesterday weeding them with warmth on my back it was difficult to mind.

The beginnings of weeding

Next is another outside my own garden – a trip to Hidcote. Perhaps too early for my partner as not so much to see, but for me looking at the early Spring bulbs and the paths and supports in the Kitchen garden was satisfying enough – lots of ideas to take home. As well as a few plants…

Not sure if I can replicate this cat’s cradle for my flowers.

My clashing primulas are a source of pleasure everyday on the steps outside the kitchen. Dunberg and Valentine need to be kept apart, but they are eye catchingly cheerful. 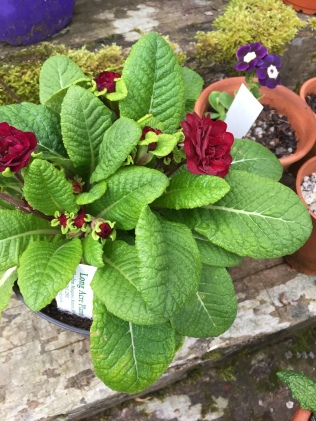 It may be getting late to include daffodils (or narcissus); perhaps for most people the baton has firmly been given to  tulips, but this week old and new favourites have finally bloomed. Hawera is a new one for me and daintily beautiful. Thalia is an old love and, yes, they have been a bit beaten by the weather (and probably the slugs too), but that wouldn’t stop me having a whole garden of them and maybe next year I will. 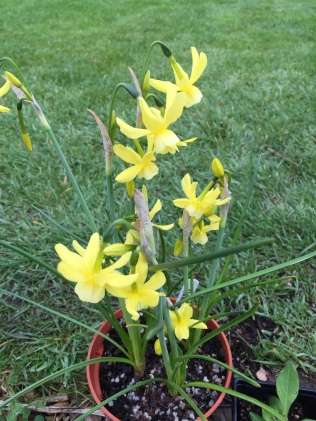 Fifth is a pot I found lurking, forgotten at the back of the greenhouse under a shelf. A martagon lily, Claude Shride which seems to have flourished in neglect.

It is often frustrating to recognise what an absent minded gardener I can be. Sometimes though there can be happy unintended accidents. So I did mean to plant up the smaller pot with tulips and Sweet Williams, but when the Autumn grown coriander plugs were slipped into a large pot, the tulip bulbs underneath had been forgotten. Never mind, they seem to have made room for each other quite well. Much more intended gardening over at the Propagator’s blog where the ever increasing Sixers share their gardening knowledge generously.

This entry was posted in Uncategorized and tagged Hawera, Hidcote Manor, Narcissus Thalia, Primulas, Six on Saturday. Bookmark the permalink.

12 Responses to Six on Saturday